Home » Random » “Legion” S01E06 and the Chicago typewriter with superpowers

“Legion” S01E06 and the Chicago typewriter with superpowers

I rather like the new TV series called “Legion“. But I also like nitpicking about things that don’t seem quite right, and one scene in episode 6 of this first season certainly didn’t seem quite right. Have a look at the image, and see if you can guess what I’m driving at. 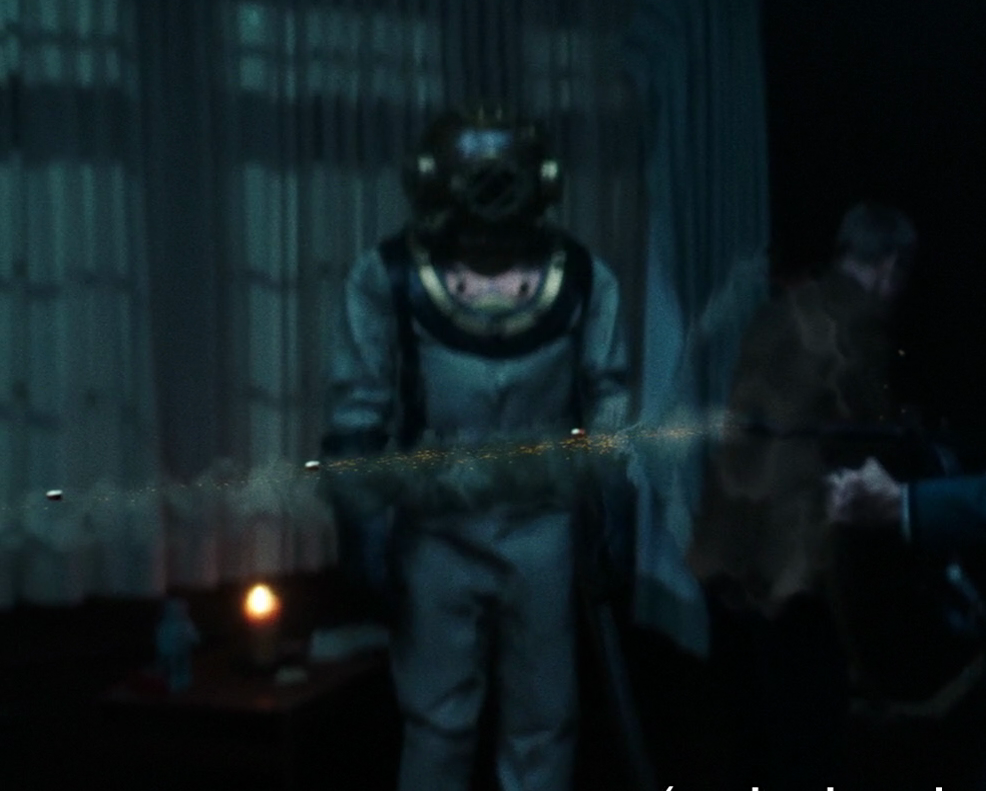 General Thompson designed a better weapon than he thought!

I will spare you the details so that you can still enjoy watching this episode if you haven’t seen it yet. But the above image is part of a bigger scene in which time appears to have slowed down to a crawl. Notice that there are three bullets in this frame, and that they have been fired from a machine gun. Consider furthermore that the bullets are virtually frozen in time. But it’s not the bullets appearing to float in midair that caught my attention. It is the fact that there appear to be no less than three of them in just this small bit of the scene. Doesn’t that seem strange to you?

To clarify what I mean, we must first explore some facts about the gun and its ammunition. The gun is a Thompson submachine gun, and Wikipedia informs us that the muzzle velocity of the .45 ACP round it fires is 285 m/s. Of course the actual muzzle velocity depends on a number of variables, but let us assume that this figure is correct. Furthermore, I estimate the distance between each bullet to be less than 1 meter. It’s probably closer to 50 cm, but let us assume it is 1 meter. Now then, what do you think the rate of fire is of this particular submachine gun?

Let’s see. It takes each round 1/285 seconds to cover one meter of distance. So, each time a bullet has traveled one meter (which only takes 1/285 seconds) another round is fired, and then another one, and so on. Obviously, that means it would take only one second to fire 285 rounds. And yet the greatest rate of fire that a Tommy gun can achieve is 1500 rpm (the M1919), which is still only 25 rounds per second. But the gun in this episode appears to have a firing rate that is at least 17,100 rpm, which means a fully loaded 100 round drum magazine would be emptied in less than half a second!

But how fast is that? Is it really so unthinkable for a “Chicago typewriter” to fire that fast? Well, let’s put that number into perspective. The fastest automatic firing weapon that immediately comes to mind is the minigun, and its maximum firing rate is listed as 6,000 rpm. That means  that 17,100 rpm is just 900 bullets shy of beating the mighty minigun three times over.

Utterly implausible. We should either be seeing only a single bullet in this shot, or the gunman should be much further away to allow for a more realistic distance between the bullets. But on the other hand, I do realize that there may be something to be said for ‘artistic license’. And after all, this is a TV series about mutants with superhuman abilities. So perhaps we viewers must also consider the possibility that a Tommy gun can have superpowers too?