Review of the 2014 Renault Twingo—a sheep in wolves’ clothing

When my father’s Volkswagen ‘UP!’ required repair of a dent and scratch on the front wheel arches—damage which was caused by a brief, yet rather brisk, encounter with the prematurely closing doors of a badly designed car elevator in Amsterdam—the garage where we brought the car provided us with a replacement vehicle. That replacement car happened to be a brand spanking new 2014 Renault Twingo. In fact, it was so new that I was the first person to drive it. And now, after having driven it for a few hundred kilometers on all kinds of roads, I thought I might share my opinion of this new Twingo. 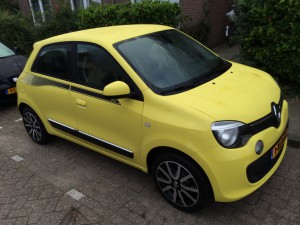 Look at the fancy race striping and those racy alloy wheels! Can this be the sportiest looking slow car on the market?

The model I was given to drive was equipped with a noisy, one liter, three-cylinder, 70hp engine (the ‘SCe 70’) with a five speed manual transmission. The motor is mounted in the boot of the car and, indeed, that means it’s rear-wheel drive. Yet with all that weight and power on the rear wheels I wonder how the car will respond in icy road conditions, especially when you get no feedback from the steering wheel—a subject I will come back to shortly. Fuel consumption is roughly on par with other city cars, but there are certainly thriftier alternatives on offer. The car is big and heavy; including the fuel it weighs a tonne. So unsurprisingly the top speed is a paltry 151 kph according to the brochure and I honestly think you would be hard pressed to find a slower car on the road today. But I venture to guess that anyone who would consider buying a severely underpowered car such as this, probably doesn’t care one iota about its top speed. So let’s just say that the car will get you from A to B and if that’s all you need a car for, then this car will certainly do. But it does make you wonder about the sporty exterior of the car. Mostly I found myself asking ‘Why?’

For the colors of the car are quite simply awful and completely unfitting for a car with an engine that would feel more at home in, say, a kitchen blender. The Twingo I tested came with the optional ‘Dynamique’ package with ‘Gris’ interior. I can only assume that this must be Renault’s marketing terminology for ‘tasteless’ and ‘drab’. Shiny white panels with black plastic, very classy. So now we can add Renault to the list of car manufacturers attempting some kind of bad copy of the interior of the retro style Fiat 500. The interior colors chosen for my test vehicle positively clash with the yellow paint of the body work. But at some point I did hear a child of five exclaiming “Look mummy, what a pretty car!” So if you happen to have the mind and taste of a five year old, then it would appear that this color scheme is certainly approved. People with taste should select a different color—though unfortunately there are only a hand full of others colors to choose from. 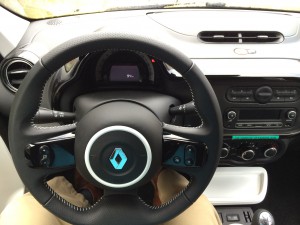 Black and shiny white against an almost fluorescent yellow hood. Is ‘twingo’ the French word for ‘tacky’?

The speedometer is clear enough, but the fuel indicator is woefully inadequate. The fuel level is indicated by a vertical column of six LEDs that light up like some kind of battery charge indicator. It is not nearly as accurate as the regular analog needle indicator and it also does not show which side of the car the fuel cap is located. How convenient. Speaking of convenience, while you do get armrests in the front doors they are too low to be of any real use. So you can forget about comfort on long trips. You can also forget about bringing suitcases on long trips, because the boot is not capacious at all—considering how big the car looks on the outside, this is actually quite an impressive accomplishment. That means that you will have to drop down at least one of the rear seats if you want to bring a suitcase of any useful dimension. The interior does feel spacious and the car as a whole feels tall and large, which makes the lack of trunk space even more confusing.

Because it has the engine in the back, the front wheels can be turned further for a smaller turning radius. This is great for a city car as it makes the car feel nimble, parallel parking is child’s play. You also feel like you’re sitting in an SUV in this car, since the ride height is high and you really get a commanding view of the road ahead of you. But the road ahead of you is all you will see, because the rear view mirror completely blocks your view of the side streets. At this point I feel I should note that the car only scored 4 stars on the Euro NCAP crash test, whereas the smaller and lighter VW UP! scored 5 stars. The suspension on the other hand is wonderful for the city. Plenty of ground clearance and the comfortable high suspension make short work of speed bumps without breaking your back. In that respect it is a more comfortable ride than the UP!, which does not tolerate speed bumps very well. 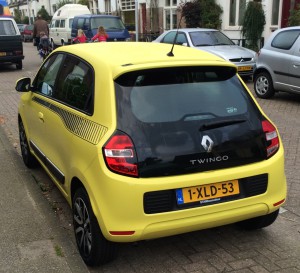 The sporty ‘eat my dust’ rear of this ‘hot hatch’ certainly shows no sign that the car is powered by a lawnmower engine.

As soon as you leave the city, the driving characteristics deteriorate markedly. There is quite a bit of engine and ride noise at higher speeds. Throttle response is agonizingly slow and while the car may look sporty, it certainly doesn’t drive that way. Overtaking must be planned well in advance—consider using a calendar—because there is simply no power for acceleration, not even when you select a lower gear. The basic 70hp version is utterly underpowered, so the 90hp turbo charged version would be the only version worth considering. The car also featured active steering (optional on the SCe 70, standard on the SCe 90), which means that the degrees by which the front wheels turn with each rotation of the steering wheel is inversely proportional to the speed of the car. Great for the city, where this system makes the car change direction almost instantly with a short light turn on the steering wheel. And at higher speeds, such as on the highway, the system will respond more subtly to the driver’s steering corrections.

But while this active steering system sounds like a good thing in theory, in practice I find the steering to be too vague and slightly nervous on the highway. There is no tactile feedback whatsoever from the steering wheel, which made me feel like I was disconnected from the car and the road. Driving the car feels a lot like playing a video game with a broken force-feedback steering wheel. It’s actually a bit like driving a boat. As such, the optional lane departure warning system seems like a very sensible safety measure to have.

The radio itself is decent, but the radio control on the steering wheel is the worst I have seen in a car. Or ‘not seen’ I should say, because it’s hidden behind the steering wheel, where it is totally useless. The Twingo I drove also featured the so-called ‘R&Go’ interface, which is a system that allows you to easily mount your smartphone on the dashboard and—provided that the free R&Go app is also installed—provides a convenient interface with the car’s sound system. Brilliant idea! There is however just one small snag and that is that the R&Go concept sucks donkey balls. For example, I have an iPhone which has an interface that is always in portrait mode. However, the R&Go mounting system requires you to mount the phone in landscape mode. Can you see where this is going? Indeed, you have to tilt your head 90 degrees to operate your phone. Not only is that  annoying, it’s probably also dangerous while driving a car. O, did I already mention it only scored 4 stars on the NCAP test?

In summary, the new 2014 Twingo as I drove it is a wonderful car if you never leave the city, get excited about useless or illogically placed buttons, drive without looking into side streets, regularly enjoy bending your neck in a 90 degree angle, don’t really care about the safety of anyone in the car, never bring any luggage, have the aesthetic sense of a five year old, think that painting racing stripes on something will make it go faster and don’t care about engine performance in a road car.

And if you’re looking for a fun, nice looking, practical, sensible and safe car… then keep looking.